Calyrex, Spectrier & Glastrier And Silver Mystery Box and Key:
As, you might know, Calyrex, Spectrier and Glastrier are special legendary pokemons from Crown Of Tundra in Galar (as said in Bulbapedia) which are not released here on this site (including their fusion forms, i.e., Ice Rider Calyrex or Shadow Rider Calyrex).
So, as they all are legendaries, they need a unique way of getting them here and I got a good idea of getting them.

First of all, as you know, Silver Mystery box

both, are currently unobtainable as there's no current use of them (here). And this is the only time that we can use them now.
As most of the legendaries are summoned with their particular summons only, so these Crown of Tundra legendaries would also summoned in the ancient cave to get their eggs by their particular summons only. They will be found inside Silver Mystery Boxes

with the help of Silver Mystery Keys!

(as stated by bulbapedia here). (I'll state down how this item will be used here down in this thread post only)
Now as this item is unique which is required for these fusion forms only, it should also be found inside the Silver Mystery Box which makes this Silver Mystery Box

entirely for the purpose of getting these legendaries (as same as Black Box and its key is used to get 2 maps for summons of different legendaries and 2 form change items only).

List of Items found inside and purpose of Silver Mystery Boxes And Keys;

So, there are 4 items which will be found inside Silver Mystery Boxes

(Summons may have their particular different name, but I chose these because these are the items which attract and lure those legends making the term 'Summon' meaningful.)
(Any one of the item would be found while opening a Silver Box, and getting any one of them in that box would be totally random)

How will we get those Silver Mystery Items?

Well, basically as only these 4 items will be found inside this box so it would be better to make it quite rare (just like Black Mystery Items.)

So there could be any one of the given three ways will be selected to get these Silver Mystery items; (maybe only one way would be selected :P)
➡ The first idea of getting those Silver Mystery Items, is one of my favourite because it is related to a feature which is not having any good use other than getting badge from it. (here)

Yes, the wondercards from event distribution are not getting any good attention and are just ignored. So, the idea would make to get more attention. The idea is that to get any one of the Silver Mystery Item, (either Box or Key, randomly) from the wondercards page after you have collected any of the 3 cards. This will just not only make the wondercards more attentive and make them people to get it but also would incense people to do tasks to get AP for the wondercard as well as event pokemon also. This will directly make people to do interaction when an event distribution is on. (The amount of cards needed can be different and also we can get another Silver Mystery Item after getting another 3 cards and so on) 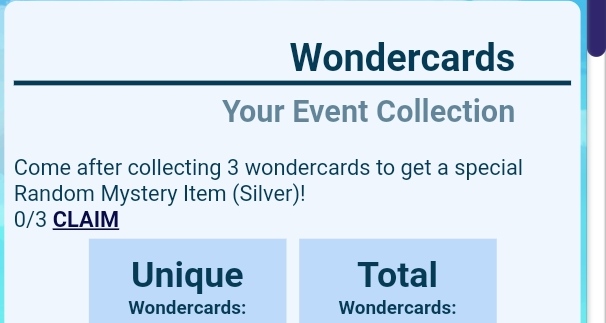 ➡ The second idea would be getting them from rumbles randomly through a very special map (permanent if unlocked just like galar maps) named as "Freezington" (as it is the place around where these legends are found in the game).
Or
The rumble place would be the next extended form of "Galar" Map which can be taken from Gem Collector by exchanging some fixed amount gems.

The Silver Mystery Items would be found randomly by rumblers or maybe get boss-battled by any one of them and that if our pokemon defeats them, they will get those any one Mystery Item and would bring them us back.

➡ The Third idea of them would be just as classic as how we get Mystery Black Items randomly through boiling items in Gem Cauldron. (If it gets implemented with the selection of this way), from the implementation day, the Silver Mystery Items will also start appearing (as just like Black Mystery Items appear) while boiling.

Now, how would be this

Reins of Unity item will be used?

The fusion of Calyrex with Spectrier Or Glastrier would work just as like of Cramorant fusion form process, Beachamp one, Mr. Moddy one and the Solastra Event pokemon process but with the use of that special item, Reins of Unity.
It would work like,
if we have the item 'Reins of Unity' in our bag, and if we go to the pokemon Calyrex summary page, at the top of the page it will show like,

After clicking on Hypertext 'USE IT', it will take you to another page for the selection of the pokemon to fuse it with. It can be either Glastrier Or Spectrier.
Once selected, and clicked 'Confirm', your both pokemons will be fused into each other with the new pokemon emerged out which can be either Ghost Rider Calyrex Or Ice Rider Calyrex depending on with which pokemon it was fused with. Now both of your Pokemons will be lost after this process and new Pokemon will emerge.
After this process, 1x Reins of Unity item will be lost from the bag.
The fusion process can be stated like,
=> Calyrex + Reins of Unity + Glastrier = Ice Rider Calyrex

Kitties! Riako has no idea what he unleashed with that update🙀
Collecting Lovely Larvesta and Silly Seel Plushies~
Looking for Ice Gems and Flying Gems here! Help me hunt a Shiny Articuno!
(You can win your own non-shiny Articuno in return)
Breeding events for the cause here!
CCShinx

Credit for avatar goes to CyndaquilLuvsVan_Halen!

Support, although the thing with shinies is that they would be complicated, and my idea would be to have only the steed to be shiny, so if you use a shiny calyrex, the shiny goes to the steed, since that is what you see more of

The most best option would be just not to include those Shinies for the completion of Normal Dex unlike how the Cramorant's both forms (which included shiny in them) were made to be required for Normal Dex.

So, thatswhy I added them in the spoiler of 'Shiny Forms' that these should only be required in Shiny Dex. As these are Legends like other Legendaries, they should be quite rare and also their summons, so making Shiny Steed and Shiny Rider adding to the Normal Dex will increase their complexity only, so, better option is to make them to be required in the Shiny Dex only. :)
Only Normal forms will be required for the Normal Dex.

The only thing people are attentive towards wondercards are for collecting the 25 cards for the badge. This suggestion would help people to complete their Galar dex [?] And also make them turn their attention towards wondercards...

Support! I love this idea! It's clear you put a lot of thought into it all. I think the Wondercards system is really interesting, though requiring just 3 is potentially a bit too few. It would be nice to see the silver boxes implemented and this is a great way to do it!
Auction

My friend got spectrier from the lab 0.0 the egg is in his party
Hope you have a great day! (Plz click my party.)
KitsuneNinetales Glastrier and Spectrier are now added
On hiatus, slowly getting back into it
Here's a few positive quotes c:
"It's not whether you get knocked down, it's whether you come back up."
"Just be who you want to be, not who others want to see."
"You are braver than you believe, stronger than you seem, and smarter than you think."
"Be who you are and say what you feel, because those who mind don't matter, and those who matter don't mind."
Nightscheme

Are Fusion Forms of horses and calyrex added?
KitsuneNinetales

The pokemon are all added now ^^'
On hiatus, slowly getting back into it
Here's a few positive quotes c:
"It's not whether you get knocked down, it's whether you come back up."
"Just be who you want to be, not who others want to see."
"You are braver than you believe, stronger than you seem, and smarter than you think."
"Be who you are and say what you feel, because those who mind don't matter, and those who matter don't mind."