This user has left the game 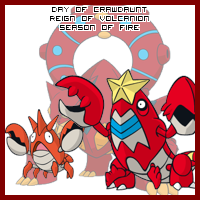 Welp, the year is almost gone, and with it, so is my time on this circle of hell we call ph.
I can't take it anymore, with the immaturity and arrogance shown by the admin, the blatant neglect of suggestions, the toxic users, I've come to realise that I've run out of pecha berries these past 6 years have been lousy, its been good at times, but mainly its been bad, and its time I stop giving this site my time and move on to healthier sites.
To all my friends (you know who you are), thanks for being part of my life, without you I'd be immensely lonely, and if you still want to contact me, I'll be updating my contact links so you know where to find me.
To those who have contributed to this toxic environment, get a life.
To everyone in general, like I once said, the future is built on dreams, and we all have a toolbox, so get out there and start building, I'm sure it'll be amazing.
Well then.....Farewell!
7 Months ago

*epic anime music*
ONE BALLLLLLLLLLL
Rayquaza: I got captured by this dork?
7 Months ago

Rayquaza: *exists*
Me: I MUST HAVE YOU
7 Months ago

Lu bu, my gallade boi, why can't you be more like mochizuki (crobat)
Lu bu: Crobats are frail tho-
SHE BEAT AN ELECTIVIRE WITH A 2 LEVEL ADVANTAGE AND LIFE ORB THUNDER.
Mochizuki: *epic sunglasses* get on my level scrublade
7 Months ago

Did a contest in SP for the first time.
Won with my continent turtle boi, I'm so proud of him <3
7 Months ago

Whats the difference between the move Toxic and PH?
You can cure the poison from toxic easily.
7 Months ago

What were the best parts of your time on PH this year?
I'll make a bullet point list of mine
-That epic callout, I deserve a gold medal for that one.
-Two wholesome beans being absolute joys on my feed (ralsei and rainripple)
-The shiny mega mawile hunt.
-My posts about my gaming highlights (like SP)
-All of my friends (including this gremlin, who needs all the love and support she can get, no joke), you tenants of the xurk shack are amazing.
7 Months ago

Training my team up in BDSP to re-fight the E4
My pokemon ain't gonna get wiped out by those monsters.
7 Months ago

captured articuno, zapdos, and moltres today, now I can go for lugi boi, rayquaza, the works.
and also....that ONE superboss.
7 Months ago

Me: ok whats the swarm today?
*Phanpy*
Me: YEEEEEEEEEE
7 Months ago

"Even though BDSP and SwSh are all playable on Switch and have Pokémon, items, and other features that are included in all four titles, there’s no way to directly trade Pokémon or items between games. This also extends to online battling and other multiplayer actions, which are all limited to within their own versions."
So this means I need to get 50BP from the battle tower, and if I don't want an incredibly tedious time, I gotta reach palmer twice.
I. hate. gamefreak.
7 Months ago

We all saw this coming from a billion gigaparsecs away, I can't believe we did.
7 Months ago

Scare_crow called it, I called it, WE ALL CALLED IT, WE ALL SCREWING CALLED IT OML
7 Months ago

Imagine struggling to beat NOVA in kirby super star, but you manage to beat marx on your first try with only one HP remaining.
7 Months ago

Hey, whats the difference between the dramablog and a poison type pokemon?
Poison types can be great lifeforms to be around, and their trash piles are adorable.
7 Months ago

People: *griping about how their parents are so controlling and so intrusive*
Me with parents that try to keep away every time I do something: what is this alien language?
7 Months ago

Illinois: who wants rain for christmas?
Me: no one-
Illinois: DELUGE IT IS
Me: thats it, giratina, blow up this world
7 Months ago

I hope these bedbugs are done and over with, I have deep cleaned thrice already, I dont want to do it a fourth time.
7 Months ago

How tf did my joke feed about dumb comment and win feeds get 28 likes?
thats one of my highest amounts of likes, jeez
7 Months ago