Get my own 2nd Shiny Solar Eevee [Currently on hold!]

Note to self... WHY AM I TORTURING MYSELF WITH THIS SOLAR EEVEE HUNT AHHHHHHHHHHH

"When the universe was created, its shards became this Plate."
"The power of defeated giants infuses this Plate."
"Two beings of time and space set free from the Original One."
"Three beings were born to bind time and space."
"Two make matter and three make spirit, shaping the world."
"The Original One breathed alone before the universe came."
"The powers of Plates are shared among Pokémon."
"The rightful bearer of a Plate draws from the Plate it holds."

Links to Gifs I use

I got a new laptop for my birthday, I'm happy since the one I'm using rn has 4 broken keys (I'm not even kidding :sobbing: )
6 Days ago

Happy Birthday, CjNazzy!
I wish you health and much happiness for the future!
Are you having a party with your friends today? Or are you spending your day at the Emera beach?
Whatever it is, I hope you have a very nice birthday!

I found a Shiny Magikarp in PoGo randomly~! And it has good IV's >:)
8 Days ago

*Gentle Boop to the GTS*

I'm still swapping my Perfect Emboar pair for a Samurott or Serperior one :)
11 Days ago

By PokéRadar - 4 Minutes and 24 Seconds ago.
Congratulations! A shiny Tepig hatched out of one of your eggs (Chain #199)!


Yeaaaaaah this hunt is done! I think I'll do Oshawott next just cos. And then maybe Snivy. Speaking of Oshawott and Snivy, anyone have breeding pairs of them?
13 Days ago

By PokéRadar - 32 Minutes and 45 Seconds ago.
Congratulations! A shiny Tepig hatched out of one of your eggs (Chain #168)!

By PokéRadar - 28 Minutes and 44 Seconds ago.
Congratulations! A shiny Tepig hatched out of one of your eggs (Chain #163)!

Ok probably an unpopular/controversial opinion but who cares:

3DS Rainbow DID NOT need to be brought back in the Mario Kart 8 DLC Packs when we have the GB, GC, DS and Wii ones RIGHT THERE. And 7 is the game just before this one there was no need. (I also might be in the minority when I say I also disliked 7 for whatever reason)
17 Days ago

Can this Tepig hatch shiny already? I don't know why the Bacon is being a pain like this
18 Days ago

I wonder if I should make a post explaining YT's new demonetization wave and it's implications but idk if i really want to dive into it since it gets me mad.
23 Days ago

By PokeRadar - 12 Minutes and 8 Seconds ago.
Your PokéRadar recorded the 40th Tepig in a row! You now reached the maximum chance of finding a shiny. Good luck!

Yay, I think I'll only hunt 2. I like Emboar and Pignite's Shinies more than Tepig's...
26 Days ago

why does the starter rarity have so many tall grass spots... it's a nightmare
26 Days ago

My Switch Lite has drift in the left joystick so I can barely play Scarlet without randomly stopping or wandering when I'm not touching the Switch. I need a new one, and I just got a protective case for it. But then again, it's over 3 years old...
29 Days ago

oh no, my first 6* Raid is a Normal Mimikyu

And for the new year, YT has now rolled out a brand new and terrible policy that's being applied retroactively

It's really hurt a lot of channels and it's gonna keep doing so. I hate YT but there's nowhere else to watch these content creators
1 Month ago

my profile in Scarlet says I battled 3 Shiny Pokemon

but I only have 2. WHAT SHINY HAVE I MISSED
1 Month ago

Why is Scream Tail so hard to shiny hunt? I've been wandering Area Zero for hours and I haven't found one
1 Month ago

I found a random Shiny Dudunsparce in Area Zero! I love how it keeps the Pink color as the shiny too

Well, I guess my first shiny in Scarlet is a Zwelious in Area Zero lol
1 Month ago

me and my opinions 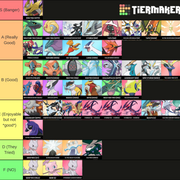