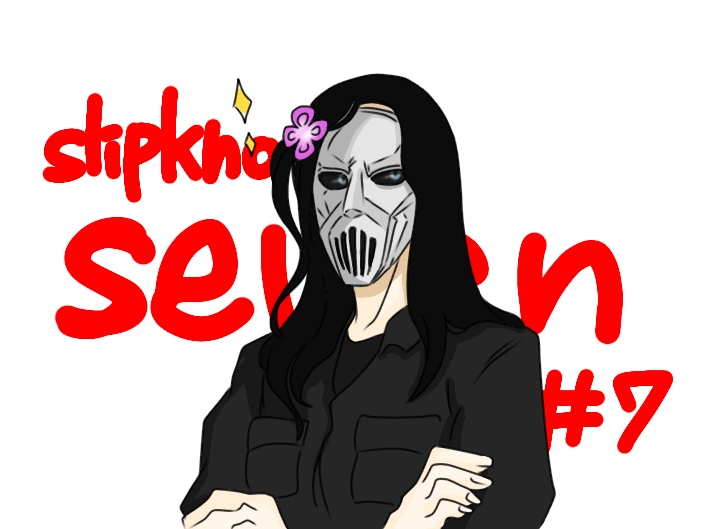 Sarcastic. Very sarcastic. I bluntly tell truth and things way I see them to people. I warned you. Also I am [censored because PH rules] full of sass~
|
Another lil' thing to mention - I am kiiinda mood swingy. If you are not okay with that or can't stomach who I am - exit is here, go on click outta here.
|
My birthday is on 25th of August, I am 16 y/o teen and my name is Nasti. Let's see who's my birthday twin, eh?~
|
Gamer and musician, I like doing references to songs I like, also I am a punk. Yeeeah, btw, I am straight, and..Happily taken <'3.
Also, I do tolerate ADEQUATE gays/lesbians/etc.
|
My favorite pokemon are Lillipup, Swablu and Xurkitree, but there are also some I really like, for example, Zangoose.
|
I don't accept random friend requests. I don't like them. But still, don't be afraid to approach me or talk to me, I promise I won't bite~
|
Previously known as MusicalChainsaw, TheSlippedKnot, SweetSabbath, AkabaneKarma, Majora_Mask, Yooterii, YutaTheTea, KyogreGirl..Oooof, I had many nicknames xd
|
Smile, my dear! You're never fully dressed without one~

Anime:
+Hellsing (Ultimate and Abridged are perfect, but first one is okay too, I guess)
+Cuticle Detective Inaba
+Jojo's Bizzare Adventure (Amazing anime, I would recommend it to everyone)
+Assassination Classroom
+Guruge Kokkuri-san

I think I didn't forget anything XD

(sorry for deleted feed, I am so sleepy lol)
Yeah, I freaked out and mistook the type
ALBINO Sizzlipede twins
But yeah, still twins, of both genders btw, feeling veeeery lucky *eyes the pair in daycare*
3 Days ago

Uh, guys, how do I evolve Narichu and Igglybath?
4 Days ago

Right, that indeed was a good day, but I am a little bitter that no matter how I try, I always get beaten on getting 1OS Pokes :<
5 Days ago

Me: closes PH for several hours to play Minecraft
Drama: Appears
Me: Bloody hell?..
7 Days ago

Finally got the Narichu, lol
3 hours before it goes away XDD
9 Days ago

Huh, interesting observation
If you breed Eternal Floette with Ditto, it will give you random Flabebe color egg.
18 Days ago

Frick..So I've rewatched Monster House, and it just hits so many years after, I'm literally crying because story is actually..Sad.

It's NOT about kids, but rather about one old, heart-broken man, who couldn't let love of his life go for 45 years after her death, who made himself look crazy because he CARED about others, he didn't want anybody to fall prey to Constance.
Also that scene, when after house's destruction her spirit flies out and man just dances with her, happily laughing that finally, she is free, that nobody would be hurt again..He manages to find curing to his loneliness in kids who helped him, in giving everything the house swallowed back..
19 Days ago

"Oh, it seems like your YEET The Pikachu! looks hungrily at the Pikachu in your party. Will you - well - let it?"

All hail the YEET bird XD
19 Days ago

Yea I really do think some people deserve a place in my blocklist
Like auction snipers.
A certain once specifically, if he sees this post - sah dude, I think you are coward.
20 Days ago

Lecture - already started hour ago
App - not working for me, tried fixing it, but yo no avail
*stands in Stonks pose* not teknology
27 Days ago

Caught an auction sniper, +1 in blocklist
30 Days ago

Ok so, I literally can't-
Avatar vocalist, Johannes Eckerström, without makeup or onstage form looks like your typical nerd - glasses, black and long messy hair, tall with rich voice with a tint of Swedish accent.
On interviews, he is polite, chilled out, and hiding in the hood XD
And then we see him on stage...
Feels like Devil was like "Yunno what? I'm bored, I'll go on Earth and have some fun. What is it? Join metal band and be the total freakshow? ALL IN B*&%$!"
That crazy black smile and eyes and insane attitude, it's just, wow.. Like he switched personalities or some thing, it's gorgeous
1 Month ago

Congratulations!
You've been a member on PokéHeroes for more than 6 Years now!

Yeah, sure, I can understand many things, but not when people are being like that, impolite.
1 Month ago

Right, I am the forgetful one
Today is the great day, the 45th birthday of the little big boy and spectacular drummer - Joey Jordison!
1 Month ago

Me: who is da good kitty? who is da gooood kitty? *continues scratching cat's belly*
Cat: NOM, TASTY HAND
Me, looking at the damage from claws at teeth: Ungrateful fur sack D:<
1 Month ago

SCREE-
I just finished cleaning my turtle's aquarium, I cleaned practically anything I could (including the guy himself, because he was a little dirty, and he started hissing at me when I began to scrub his shell XD), but my back is ACHING
1 Month ago

I am bored, soo
How about little question for ya all?

What are your 3 favorite Pokemon from Galar?
Mine are, for sure, Centiskorch, Falinks (Because that Spartan Army abomination is so funny and adorable XDD) and Dracozolt.
1 Month ago

Congratulations! A shiny Clawfa hatched out of one of your eggs (Chain #70)! Your PokéRadar reset and needs new batteries.
AYYYYY, HI THERE
1 Month ago

Okay, to clarify, I am studying law in RUSSIAN, and my friend studies medical prosthectics AT THE SAME college.

As a foreign language we have English.
So today she is texting me and asking for help with English language task, and after I ask her to show me it, I just ask myself
"WHAT KIND OF ASYLUM I HAVE AS A COLLEGE?"

Basically, the teacher sent her group an English task, with economy theme, consisting of ECONOMY TERMINS.
I remind you, she studies PROSTHETICS, AND ENGLISH IS FOREIGN FOR BOTH OF US.
Why, the heck, does anyone but economist HAS TO DO SUCH TASK?
1 Month ago

Heavily unupdated, but I am just too lazy, so excuse me

Dorkfish - dude, ya may hate me, but I still consider you to be a pretty good person, despite everything. I really hope to be your friend again someday. (I would highly appreciate if someone helps me with Dork tbh)..

TammyTheRanger - a precious and kind bean, I really like you :3

Yamper - another Primarina lover over there, jewish high five man!

Fernsong - MEMES ALL THE WAY MY MEME FRIEND!

Mewshine - you are a very talented artist, I wish one day I could draw like you ;3

~OyStar~ - THE ARTIST BRO pls stop drawing so many ocs for your own sake, you will drown in them ;-;

More to be added, maybe~