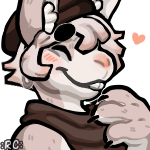 [x] you're welcome to message me but please don't just send me hi/hello messages
[x] i won't battle/trade/give you stuff
[x] unless we're friends, please please don't ask me for free art

Lil’ reminder I’ve got 2 polls up about a possible secret Santa this year, if you’re interested please have a look!! ❤️
Yesterday, 12:36

I had such a surprisingly nice day, I ran into a friend I haven’t seen in a while and he took me out for dinner and we talked about trans stuff and feelings and it was such a nice time!! 🥺❤️
7 Days ago

This is a big ol' wip, but I animated Haku and Chihiro from Spirited Away recently!! 🐉🍙
8 Days ago

I made some polls about Secret Santa, if you’re interested please vote and help me start to organise!! ❤️
14 Days ago

I haven’t done a Secret Santa on PH in a loooong time, but would people be interested in taking part in one this year? :0
15 Days ago

I got told my outfit made me look like Howl this morning, so I think I’ve peaked ✨
16 Days ago

For some reason, the pokemon I really like I'm so-so with my own plushie drawings but pokemon I don't really care about, I always end up with a drawing I quite like
Looking at you Beedrill, what's your deal??
23 Days ago

I've slowly been working on a sports anime idea (just for fun!) and I need some help deciding what colour would be best for their netball uniform?
Suggestions for names would be very welcome too!! ❤
1 Month ago

I really can't draw anything I'm happy with lately,,,, I can only offer silly things 🙇‍♀️
1 Month ago

I was a little worried about legends arceus but ooooh!!!! I love what I’m seeing!!!
1 Month ago

If you haven't seen, the final versions of the Community Drawing Event have been posted! Thank you so much to everyone that took part, I always love seeing these!! ❤
If anyone enjoys colouring and wants something to do, you can find a transparent version of mine here! (If you use it, I only ask that you credit me for the lines and don't claim it as your own)
1 Month ago

It's been a while so I did another little 'get to know my ocs' meme!! (so I can avoid doing my work)
1 Month ago

I’m at a little bar with some friends and there’s a little sticker on the bathroom door saying ‘trans people welcome’ and it’s the first time I’ve seen something like that!
Bc I’ve had people yell at me in bathrooms before it’s usually kind of hard for me to relax in public places but that kind of thing just makes me feel so much better 🥺❤️
1 Month ago

With some stuff that happened recently that I'm still trying to come to terms with, I haven't really had so much time to draw
But I drew my boys recently and I'm pushing it at you here too because it's all I have to offer 🙇‍♀️
1 Month ago

500 interactions and still no shaymin, scandalous!
1 Month ago

I'm done with the animation I'm working on!! (For now, there's still stuff to fix but,,,, later)
I animated Asterius from Hades and you can watch it here! 🐂💕
I wanted to practice dialogue some more, as well as a more complicated design and I learnt that Hades characters aren't supposed to move lol
1 Month ago


hello! i’m wren and i want to be a filmmaker!
i’m an animator-in-training who’s passionate about telling queer inclusive stories and making funky little characters

i've been staff here since 2018 and i make plushies and illustrations for new features
feel free to palpad me with any questions, or if you think i can help with anything!
also, please don't call me 'dude' or 'bro', thank you!

hope you have a lovely day!!