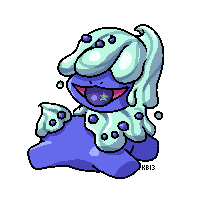 -Palpad me or PM me if you wanna talk

-I like doing art. Mostly humans, but I'm still a beginner

-I love Zelda and will often be playing a LoZ game or other Nintendo game.

-Check out my shiny shop?

I'm gonna try to lab hunt for a while

I don't think I've ever been capable of sticking to it for more than a week lol
Yesterday, 16:18

Congratulations! A shiny Miltank hatched out of one of your eggs (Chain #41)! Your PokéRadar reset and needs new batteries.

Well today took a turn for the worse :)

six years on this site and still have no ditto XP

It would help so much on my tyrogue hunt tho, maybe I wouldnt need to collect 12k gems
19 Days ago

Congratulations! A shiny Farfetch'd hatched out of one of your eggs (Chain #15)! Your PokéRadar reset and needs new batteries.

The berry market and bulletin board really need some updates :(

For as long as I remember we have complained about the rewards in bulletin board being awful, specially for higher levels.
And tbh the price limit in the berry market isn't really great. Maybe it's fine for berries but things like berry juices are very underpriced.

I'm not even gonna mention the seed makers or cooking, but just fixing those two could help so much
23 Days ago

Had a dream that we had an event called a "Summer Festival" and it was really cool like a circus of sorts?
There were plushies you could win in a minigame (like bug hunting) and event pokemon and a berry garden event (something like preparing drinks for the festival idk) and a summer sale
1 Month ago

So yeah I just have wips, tons of them, some files are half a dozen different sketches layered together :(
1 Month ago

Also, I bought pokemon arceus and loved it
It's the first time I've ever played an official pokemon game :)
2 Months ago

Buut I've never ever made any sort of video so does anyone know what program I can use for that?
7 Months ago

This is the part of the day where I consider every other career I wish I was studying instead
Today's choice: musician
10 Months ago

My teacher: Unfortunately, prepositions in english work different than in spanish

Me: bold of you to assume I understand prepositions in spanish
1 Year ago

Wait, shiny Leavanny is so cute?

So I had bobba tea for the first time and it was G R E A T
I had this purple root thing, it was pretty awesome
1 Year ago