Welcome to my Profile 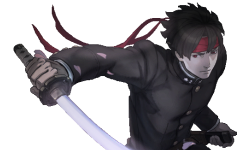 Don't be afraid to PM or Palpad me to talk, just note I am not the most social person, and may not respond due to anxiety. I'm pretty friendly though!

《 Personal Rules 》
▪Please don't ask me for my stuff, whether it is pokemon or items. My stuff is not for sale unless stated otherwise.

▪I do not like battling, and will not do so. Do not ask me.

▪Please Palpad me beforehand about adding me to your Palpad group.

▪Feel free to talk to me though, especially if it is about the fandoms I'm in!

"Believe in yourself.
Keep looking forward until the bitter end."

Okay, so my little brother who barely knows how to read beat Wind Waker largely by himself (he had to get help for a few puzzles and one forced fight against two Darknuts, where he was stuck at 3 hearts and no healing items, but he beat every boss by himself, including Ganondorf).

What does everyone think of me?
2 Days ago

Me: Sees their is another person on PH who likes Kazuma Asougi.

Since in New Horizons I've completely upgraded my house, part of me wants to transform one of my rooms into Barok van Zieks Office from DGS2.

I like DGS, I like Victorian-esqe aesthetic, and two of the rooms in NH are longer, so it only seems logical.
5 Days ago

So I found someone that subbed some promotional videos for DGS, specifically for the week before the game was released.

In the first one, Sherlock is claiming Ryuunosuke is guilty of spoiling Sherlocks appearance, though Ryuu is found innocent, due to Sherlock having been revealed, and because he was in the video. After Ryuu was proven innocent, Sherlock said that he's known people who have lost friends because of spoilers.

But what hit me is what he said after. Sherlock started describing some sort of spoiler from his books about a man who fell off a cliff to his death, but it turned out he was still among the living, with Susato thinking there was something off about the spoiler.

I'm sorry, but I'm pretty sure that's foreshadowing about you know who! Like what!?
6 Days ago

I just realized something.

Like, even if you have a legendary on your team you'll still be challenged. That, and it also doubles as a training ground, as you can gain levels in their. And when you beat it, you got a shiny. and I actually am a little sad I've beaten it

and this is the reason Gen 5 is the best gen, there is many different challenges you can try, as you're also got Pokestar Studios and the Pokémon World Tournament
7 Days ago

Video game/book/movie: *has a cute couple who truly loves each other and something bad happens to them*

Video game/book/movie: *has a cute wholesome family relationship, whether it is a parent-child relationship or siblings, and something bad happens to them*

Me: Nooooooo! They were so happy, why would you do this to them, they don't deserve this! Whyyy would you hurt me like this! Aaaaaaaaaaa!
8 Days ago

Congratulations!
You've been a member on PokéHeroes for more than 4 Years now!

So, since 3 out of the four people who commented on the what pokemon/animal would I be feed that I made said I would be a buneary despite the fact my poke-sona is a rotom, but idc, buneary is cute.

So I drew my sona Kel, who is literally me, as a buneary. I think it turned out pretty cute!

though she ain't replacing Plazie. Plazie means too much to me to do that
9 Days ago

*hops aboard the bandwagon*

What pokemon/animal do you see me as and why?
9 Days ago

I saw this meme and I honestly I probably laughed harder than I should have.

like I may absolutely love the games and think they're some of the best video games to exist, but yeah the characters be dumb sometimes
11 Days ago

I'm not going to say if anyone's right or wrong, as I still want to keep it secret, but based on my art, how I act, etc... how old do you think I am?
11 Days ago

I was bored so I decided to find one of my old signatures. Though I'm kinda sad because I had another really cool one but I couldn't find it.
12 Days ago

Okay, so I promised my sis FluffyMareep that if she could get a poker chip unstuck from this tiny container that was the same size as said poker chip, I would draw her a really nice piece of art. I was 90% sure she couldn't do it.

Well, guess who now has to draw a picture of Iris Watson, Pearl Fey, and young Trucy Wright together because they are FluffyMareep's favorite characters.
17 Days ago

Like seriously, is it really that difficult for people to understand that others can have opinions that differ from you!?
17 Days ago

Brain: You should draw something.
Me: like Artshop orders?
Brain: No. Not right now.
Me: What should I draw then?
Brain: IDK. But draw. Here is motivation.
Me: ...
Me: Okay but motivation is useless without an idea.
Brain: No idea! Only draw!
19 Days ago

I mainly like gen five as it has the best story, it feels deeper than the other pokemon games, and N is an amazing antagonist.

It also feels like the "peak" in the main series to me, as the games in my opinion have gotten worse since then. ORAS were fine, but XY felt to easy, as did Sun and Moon (with USUM feeling like the same game with but somehow worse and they ruined necrozma. It was cool in SM, but then pokemon decided they sould make it OP and not even make the trainer work for it)), and SwSd, from what I've read and watch, is even worse than USUM.

Also, I'm SICK of Pokemon handing the player OP legendaries. I'm sorry if this is an unpopular opinion, but I want to be challenged when trying to catch a legendary. Seriously, I've read the SwSd forces you to catch Eternatus, and will apparently crash if you somehow fail. No, just no. That doesn't make me want to play the SwSd anymore than I wanted to before.
20 Days ago