Hello, kiddies. It's the SilverWarrior here, opening the doors to my new home, The Poke Asylum.


I have many options for getting the Pokemon in question. First, of course, is my Trade/Sell box. Any pokemon in this box is available for purchase

Another option is breeding, which the selections for breeding can be found in the National Dex and Emera boxes.

Do note that, if ordering a Pokemon in the Emera box to be bred for you, it may take a little longer, due to it being a specialty pokemon.

My Fish Box at Emera Beach is also open, and the pokemon that can be found there are listed here. And, along with my Fish Box, I now have access to the Galar Rumble Map and will, on occasion, bring in some of the Galarian versions of previously released pokemon (i.e. Meowth). Though, with it being on Stage 1, the selection is a little sparse (which is why I have a Price Comparison chart below, for alternate payment options).

For 'quick' options on getting a Pokemon (no Daycare breeding), there is also the Tall Grass & the Gem Collector.

And, if you want a particular evolved form (i.e. Narichu/Naruchu/Raizumaki or any of the evolved forms of Pumplin and/or Orryrm), be sure to swing by The Evolution of Pokemon to see how to get the form you want.

So, some ground rules down for the Asylum...

PH users who have been a member for less than 3 months will have a 50% discount on any pokemon purchases made (with the exception of future SM hunts) from me. And, if I should happen to be in the middle of a hunt when a Breeding Order is placed, the price I tell you when said Order is placed will remain the same if my hunt should go past the 3-month mark.

There will be a limit of 2 different breeding pairs requests per user at a time (i.e. Shuppet & Gastly). Any user who requests a breeding pair/pairs CAN NOT make another breeding pair request until their previous request is fulfilled.

Anyone who requests a breeding pair of pokemon will get a 20% discount on the purchase price (with a max of 40% for 2 different breeding pairs).

Also, with me being active at the Wonder Trade Station, any Ho-Oh passcode I get will be sold for 475k PD. With the randomness of getting the aforementioned passcode, I felt it prudent to sell it through the Shop when I get it.

Recently, I added a section call SilverWarrior's Waiting List. It's a reminder to me on orders made to me personally while I'm on Shiny Hunts. With that being said, there's a couple of rules that go with it. Rule #1 is I will only take on a max of 5 orders on the List. Rule #2 is, if any order has 10 or more Pokemon requested, the amount of accepted orders will be reduced down to 2. Please keep that in mind when placing an order with me.

The price guide for the pokemon that I'm selling will be as follows...


The price for Mega-able pokemon, whether they're an Event or not, will depend on their individual price range on the Price Check thread.

Payment can be made mainly with PD, but will accept payments made with Mega Stones, Ultra Saddles, Dynamax Crystals, Meltan Candies, Rare Candies, Nuggets and/or Gems... as long as the total amount of items being used as payment comes close to how much the Pokemon would be (for example, 1 Meltan Candy and 2 Dynamax Crystals would be an acceptable payment for any Shiny Common Event Pokemon like Swelluhodo).


Decided to include hatching eggs you get from the Gem Collector as well to the Shop. For this particular case, the PD price is waived in lieu of gifting me the required Gems (i.e. 20 Normal Gems for Teddiursa). The selection of Pokemon I can hatch for you via the Gem Collector can be found at the Gem Collector Egg Shop. This particular service is mainly for those who are on Shiny Hunts, but is open for anyone who's low on PD, but has the Gems required.


On top of making egg purchases from the Gem Collector, I can also use any Ancient Cave summoning item that you have on hand. The following are the summoning items that are available for use, along with the Pokemon that can be obtained from it.

On top of the items mentioned above, there is one more summon item to list. But, due to how it's used, it gets its own little section. That's right, folks. I'm talking about the

This little item doesn't seen like much. But, if given to either

Lunala as a held item (while they're in your party), it opens up a new section of the Ancient Cave known as Ultra Space. By entering the Wormhole, you can then be transported to one of 10 places. If you complete the tasks required once entering one of those places, you can leave with the Ultra Beast egg from that area.

As you can probably guess, this spot is to let you guys know what Galarian variants I can pick up for you from the Galar Rumble Map. And, though Shinies & Mega-ables can be obtained from the Map (got 2 Shiny Galarian pokemon this way), I won't be taking requests to get a particular Shiny (took nearly 11 months from my first Galarian Shiny to get the 2nd one). This list will 'expand' when I get the Galar Map upgraded.


Though PD is not required for the Gem Collector & Ancient Cave services mentioned above, I will not deny any PD donations.

This section is in place, mainly for me to keep track of orders made to me personally while I'm in the middle of Shiny Hunts and/or other orders. Once a Shiny Hunt/order is finished, the Waiting List will be worked on. i just cant do it anymore 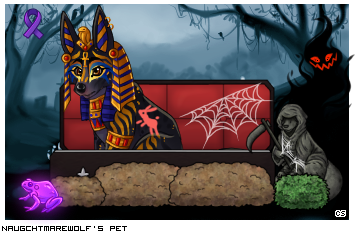 Added a new service to my lineup, involving the Ancient Cave (currently with all available Fossils & the Eternal Rock, will update with more AC summons later).

Also, please welcome Lonewolf8600 to the staff of the Asylum.

Added more Ancient Cave summoning items to my personal shop. Will have a special section for the Ultra Saddle & the Ultra Beasts in a later update.

added a spoiler section for the current Staff Members, a Price Comparison chart (for those who pay with Items instead of PD) to my post & a Gem Counter.

More 'cosmetic' updates on the way.

Transferred the GTS Trades section from the Road to Galar thread over to this thread.

Howdy there! I'm not entirely sure if this is where I should be replying, and if it isn't, let me know and I shall PM my order/take it to an appropriate thread instead- However, I'll get into the order itself!

Is it alright if I'm able to be bred a pair of Galarian Mr. Mimes? [One male, one female, just standard breeding pair stuff, nothing more.]
I assume since they're both Rare, I'll have to pay 1,800 PD for their combined price, However both being Galar, it's alright if the pricing's a bit higher, say, 20,000 PD combined if Galar counts as Event- I'm certain no matter what, I'll be able to pay any amount for them.

I'm also willing to wait a while, no worries!

@ToonyRcads first, you can place the order here (though it would help to note who you're wanting to fill the order for you).

Second, I'll work on that as soon as I finish with my current hunt

My order is still going to be 2 Galarian Mr. Mimes [Breeding pair]

[The OR is still in case if a "Galarian" variant would count as an Event pokemon.]

I don't mind who breeds it at all, but I guess since I have to note, either @UncleJoker or @Scare_Crow when the time's available indeed. LMK when it's fulfilled as well via PMs so I can look for the private trade in the GTS when the time comes please.
I'm cool waiting for your hunt to finish as well, thanks! ^^

galarian Mr. mime isnt breedable must be gotten through rumble and since i have the only rumble available to get the pokemon ill fullfill this order.

Darned, the breeding part is unfortunate but, understood, thank ya'lls a ton! Hello there. May I please request a Ralts breeding pair and an Aron breeding pair? I am assuming this is 1,400 PD and 1,000 PD respectively. Do let me know the final total with the breeding pair purchase discount applied.

@deaky a couple of things. Though you did get the right price for Aron (Medium Rarity) at 1k, Ralts' rarity is Rare, bringing that price up to 1.8k PD.

With the Breeding Pair Discount Price, it would've brought it down to 1,680 PD. But, after seeing that you've been a part of PokeHeroes for less than 3 months (in fact, 5 days as of this post), it automatically qualifies you for the 'New Player' discount, which is 50% off your order.

Taking into account the New Player Discount, it brings your total to 1.4k PD. I'll get started on your order and will let you know when it's ready for pickup.

My apologies, I must not have been paying attention when I was scrolling through the list of egg rarities. Thank you though.
SilverWarrior

Though it won't start up for a bit, I am getting ready to finish my 2016 hunt of Shiny Charmander.

More information can be found at the Shiny Charmander Hunt part 2.

I hope you don't mind me sliding in an order before your shiny Charmander hunt. I would like a Zigzagoon pair and a Snorunt pair, for 200 PD and 1400 PD. If it's not too late to get these requests in, let me know what the price is with the discounts applied. If it is too late, may I request that @Scare_Crow does it?

I cannot do it through breeding i can only do it buy buying the pokemon from someone else or hope someone is giving away the said pokemon for free. I'm already on a zompette hunt.

Ah, my apologies, I did not realize. Good luck on the hunt.