🌸Welcome to my Profile🌸 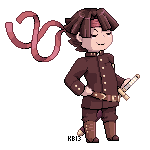 Don't be afraid to PM or Palpad me to talk, just note I am not the most social person, and may not respond due to anxiety. I'm pretty friendly though!

《 Personal Rules 》
▪Please don't ask me for my stuff, whether it is pokemon or items. My stuff is not for sale unless stated otherwise.

▪I do not like battling, and will not do so. Do not ask me.

▪Please Palpad me beforehand about adding me to your Palpad group.

▪Feel free to talk to me though, especially if it is about the fandoms I'm in!

"Believe in yourself.
Keep looking forward until the bitter end."

Okay, which emoji best represents nervousness because that's the one that probably fits me the best?
Today, 06:05

Everyone is doing these "comment for my honest opinion" feeds, and although I want to do one I think my opinion would be the same for most of you because a majority of the people I've interacted with as just so friendly and kind and cool and if I knew you in real life I'd probably try to hang out with you a lot because you're all so cool.
Today, 05:34

I did one of those alignment memes with some of my characters sorry for the old art, I really need to make refs for them

Also, all the characters are from the subfolders here.
Today, 04:43

new avi, why do you always take so long to load for me?

For once, it's neither me, Asougi, or the Masked Disciple. Instead it's Gina Lestrade because she's pretty cool and also has a doggo.

I just learned that tomorrow is the anniversary of Dai Gyakuten Saiban.

I should draw Ryuunosuke. Or Susato. Or Sherlock. Or Iris. Or Asougi. Or Barok. Or Gina.

Rant regarding my fandoms in the comments:
Yesterday, 15:09

My body decided it wants to feel sick. Why do you have to do this to me body, I just want to draw Klimt van Zieks...
Yesterday, 06:43

I've always wondered if I come off more serious to people due to the fact that I don't use emojis or internet slang a lot?

also, the reason I don't use a lot of emojis or slang is due to the fact I don't understand how to use them because I suck at following social standards.

Like I literally had to google what stan, simp, etc. mean.
Yesterday, 05:47

Bravely Default: Has to physically restrain herself from rambling about Tiznes and Yewnolia and maybe Ringdea, because she loves them and wants to share her love for them constantly.

Ace Attorney: What ships does she ship? Who knows cause she ain't going to tell, but she definitely ships ships.


ace attorney's is because the AA fandom feels a lot more toxic than BD when it comes to ships
Yesterday, 04:20

Look! I don't draw Asougi but at the same time I technically drew Asougi.

Although I love the Masked Disciple my favorite Ace Attorney prosecutor, I still really love Simon Blackquill, who was my favorite prosecutor before I watched the Dai Gyakuten Saiban games. Heck, Blackquill is still my favorite main series prosecutor.

And now part of me wants to go play Dual Destinies and turnabout storyteller again.
2 Days ago

also, the Masked Disciple needs a pet cat
2 Days ago

Oh, what does one do when they're the only one who ships a ship and they're slowly growing more and more obsessed with the ship but they can't tell anyone what the ship is without being heavily judged/hated for shipping the ship, so all they've got of the ship is their own thoughts/content?

Asking for a friend.
3 Days ago

Okay, but in Dai Gyakuten Saiban, Kazuma Asougi is like, 80% pridefulness. Like seriously, I love you buddy, but you need to chill before you get yourself killed or worse.
3 Days ago

I just learned that in SwSd they brought one use TM, well "TR"s back. Like, that was one of the most annoying things in the game, there's a reason I haven't gone back to play Platinum because I hated that feature.

Like seriously, as time goes on, the more I learn about how bad SwSD is.

and honestly, since BW/B2W2, the games have just been getting worse. Which, although part of me would love a DPP remake, as those were the first games I played, I don't want it as I know the Pokemon Company would completely ruin it.
3 Days ago

I like how "all interactions you make today count" has a slightly ominous feel, and seems to imply interactions made on other days do not count.
4 Days ago

Fun fact: I have a lot of scarves.

though technically I'm missing one, which is this slightly thicker, very soft and plush off-white scarf. Worst part is that that specific scarf is my top favorite and it's causing me stress that it's missing
5 Days ago

Okay, let me just tell you something.

Whenever someone does a face reveals, it's always very off putting. Not because they look bad or anything, but more so because I associate you with your avatar.

And even if this is a completely illogical thought process, my brain assumes people look exactly like their avatar.
5 Days ago

How does one force themselves to have motivation so they can get art shop orders done? Asking for a friend.
6 Days ago

Curse my broken internal clock and not realizing how much time pasts so I don't realize I've stayed up basically all night and it's now 5:16 AM meaning I'll be tired/grumpy all day. I can't take a nap either, as that will only make me unable to sleep tomorrow night and the cycle will continue.

On a better note maybe, boop!
6 Days ago