Poison-types are strongly opinionated and independent. They tend to go their own way in their personal pursuits, unconcerned with what others think of them.

You got mew! You're super upbeat and like to hang with friends, but that doesn't mean you can't have some alone time. 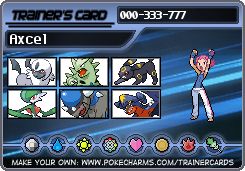 So, I understand that a number of Dynamax Crystals are required to gigamax a Pokemon, and they need to be over level 100, but how exactly is that obtained?
The 'use' feature does not work, and the Pokemon has leveled up while holding it, and I cannot give it more than one.
Am I missing something?
3 Days ago

First 10 to comment will receive them.
I will be checking to see if you have them already or not as I do not wish to gift any doubles.
3 Days ago

For anyone who is really good at math:

To buy at least 10 Mew plushies over the event, how much DP is that in total?

I don't know the ratio of how much the cost increases per purchase.
4 Days ago

I am DONE with my Zubat hunt! Hope was starting to fall, too, because the first two[and that random mega] appeared so quickly while this third one was so slow. >.<
It's so difficult to shiny hunt evolutions without premium. Granted, this is the second three-stage I've completed. I've had more trouble with single ones like Eevee[despite having like 7 eeveelutions].

But, I'm done and like my Rookidee line, they're all female! What are the odds? Mega one is not, but that was also just a nice surprise. ♥
9 Days ago

I'm sorry, but Shiny Golbat is colored like watermelon-flavored bubble gum.
I knew it reminded me of something and yet I couldn't place it until now.

Watermelon-flavored candy is a horrible creation, by the way...in my opinion.
18 Days ago

Not to be completely insensitive to the situation, but the majority of people who bring attention to a personal issue[such as what's happening right now], aren't actually planning anything definitive.
Whether or not they're actually in trouble is not always clear, but generally when they reach out to others, it's so they can be talked out of their worries and pain.

I'm aware it's not always the case, but even still, those who are sharing the help line are doing more good than those who share the hashtag, which is exactly why I am not sharing it.

Again, I'm probably coming off as insensitive, but that's the person I am.
Do not comment just to tell me off, that's not what this is about.
18 Days ago

This has been my go-to team for a long time. It's always my default for a basic OC.

#megastone_fact
Do not be fooled by people who are attempting to sell mega stones for 500k pd.
It is a simple fact that the cost of mega stones have obviously dropped due to
1)free mega stones with event distribution
2) cauldron refunds
So basically the cost of a mega stone is 250k-300k now

Please spread this message
19 Days ago

There's a reason why I'm not particularly social on here, or really any site.
People are salty and take things way too literally.

Maybe my tone of sarcasm is too advanced for some people...
22 Days ago

Ya know when someone does something annoying, but it's made ten times worse if you don't like said person?

At the moment, I'm talking about when someone posts a feed asking a question and then deletes it after people respond to it.
I don't know why, but that's very irritating to me.
Especially when said person clearly has no problem spamming the feed with utter nonsense. But, again, it's made worse when you don't even like the person.
26 Days ago

Shiny Budew caught on the Honey Tree!
Yay!!!
28 Days ago

Thank you to those who helped interact with Rowan's Magikarp and gifted or sold me rare candies!!
1 Month ago

Currently in the lead, but it's not by a whole lot.

Still looking for more rare candy and berry feeds.
Please donate if possible, otherwise I can possibly buy the candy with gems other than Normal and Dragon.
Thank you.
1 Month ago

I don't like being a disappointment to people, even fictional people. And it just so happens a fictional person by the name of Professor Rowan is very disappointed in me.

This giveaway is to help me win the professor's challenge of beating Oak. I need interacts and rare candy if possible.

Please feed Luna a berry, and show proof in the comments.

Bonus entry if you interact with Luna as a guest, and show proof.

Additional entry for every RARE CANDY gifted to me.

Giveaway ends when I send Luna back and win.
1 Month ago

Happy Birthday to you!
1 Month ago