You Are My Whole World...

🍁🍂🍃One day in October
The world finally
Seemed to turn
It never once did before...

That one Autumn day
Something remarkable
Occurred,
It put me at a loss for words

We fell in love in October
And that's why I love fall
Who knew that someone
Could be worth it all?


"Maybe if I smile then I won’t fear her
Maybe for a while, I can be near her
Maybe then my thoughts would sound clearer
And I’d feel safe tonight” 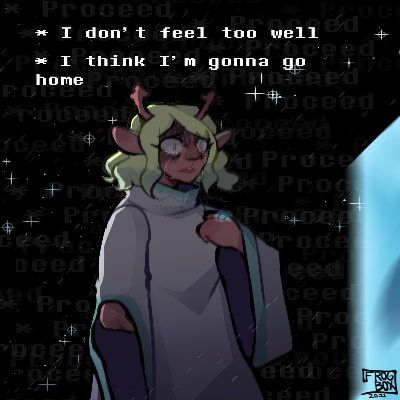 Art by FR0GB0X on Reddit! Please check out their art if you get the chance to! ^^ 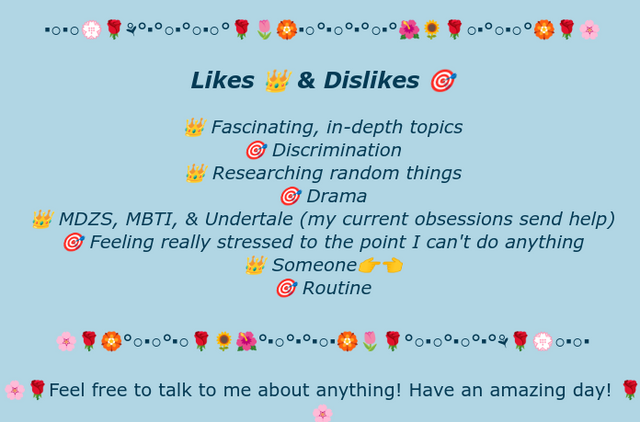 I'll Be Your Beach

I don't understand when people are constantly changing their profile pictures-- I mean, that's kinda me too, but- imagine being that decisive and not heavily perfectionistic about what pfp you use! And deciding to stop using your current one?
2 Days ago

I had a dream that I had 2 Dragon Gems, and then I looked in my Item Bag and was legitimately so confused-
4 Days ago

That one internal debate: "Do I buy this Pokémon I won't even use and will regret buying or continue saving for [thing]"
4 Days ago

Me every time it turns out I have both a box and a key of a certain color: "WAIT!! Hold on a second! PERFECT! Now to sell them both together for a discounted price! AHAHAHAHA! I'm so evil!"
6 Days ago

Me: "Ooh pretty shinyyyy in Auctionnnn"
My common sense: "No, we need this PD for Nuggets"
8 Days ago

Pokéheroes: "The key breaks and becomes useless."
Me: "DUDE HOW"
9 Days ago

I never really get anything good from boxes but I've heard some people getting maps and summon items from the boxes I sell/give them, so when I sell them off with keys at a discounted price it makes me feel really happy inside because they might get something really nice from it-- at least I hope they do, honestly!
12 Days ago

My Treasure Hunt prize: 8 Poison Gems
The DW task from earlier: 5 Poison Gems
Coincidence? I think NOT!
15 Days ago

Waiting for the hour to be up to do more DW tasks be like: 🧍
15 Days ago

Oh no, this has happened at least twice already-
Me: "Oh, cool! A staff member birthday limited edition plushie! I'll have to get some for people later!"
-forgets to later-
-remembers days after-
-facepalms-
16 Days ago

Why do I get the feeling that after I finish my first SM hunt (once I finally start it) I'll never be able to go back to normal Shiny Hunting again? Sijsksk-
17 Days ago

Me, when I find a song I like: "Oh, cool! Maybe I should find some other songs by the artist I love!"
Me: -never listens to any other songs by the artist and just listens to that one song-
In the case of Of Monsters and Men, for reference, I listened to only King & Lionheart for five years, until now-
As for Mitski? Well, it’s only been several months but I still haven’t listened to anything but Me And My Husband-
The Hoosiers? Still only A Sadness Runs Through Him-
Beach Bunny? Only Prom Queen, started listening to other songs very recently-
Same with girl in red except the only song was "We Fell In Love In October" I don’t know why, I guess there’s a certain comfort listening to the ones you’re more used to, rather than trying something new-
24 Days ago

I have only saved up 230 Fighting Gems (for the Eggs) and 58 Nuggets (for the Premium I'll need) so far but I'm pretty happy about it- it may take a while, but there's something nice about this little start-
I'm guessing 6 months of Premium would be wise? Ridiculously expensive, but I'd like to air on the side of caution-
Anyway, I'm hoping this goes well when I can finally start it!
24 Days ago

"Do you think I could be a tree?"
Same Mateo same qwkjhf-
24 Days ago

Everyone, drop everything! Dr Doofenshmirtz has a VERY important message!
"It all began... on the day of my actual birth, both of my parents failed to show up!"
25 Days ago

Sprigatito and Sprigatito:
91%
The two seem to get along very well.
I mean, we talk to each other relatively often, and I guess we get along well, because we know each other and try to do what's best for each other, I find we argue a lot though-
25 Days ago


Thank you for visiting my profile. Please, know, whoever you are, that you are loved and appreciated and deserve everything good in this world.