Wildfyre is my Pokesona. Sakura is my OC.
Angel is my Trainer. Her unique team is mine.
They are not to be used without my permission.

Angel of the Shadows:

Created a character for each of the other Classes I need to play. Names are:

Currently trying to get dad to name his Demon Hunter Mister Kindly. I don't think it's going to go over well, but simply can't make it on her own. She needs her familiar.

Yay! I completed 85/85 tasks for the season again! Got a new Pet, Wings, and Bank tab. I also found the third Ethereal for my Monk. Dad's almost done with his tasks as well. So we won't be as super invested anymore.

We still plan on playing the other six Classes (Barbarian, Crusader, Demon Hunter, Necromancer, Witch Doctor, and Wizard) to get their three Ethys each. I'd wanted to get them to Torment 1 capable, but dad feels we could easily get them to T7, if not T10.

But there are at least 87 days left in the season, so we have plenty of time. ^.^

Also. I've made it to Greater Rift 105 Solo on my Monk. Currently farming Keystones so I can raise more gems up and Augment more items. Cause that will be the most helpful in inching me up the tier list.
Yesterday, 22:16

Ahh! Just added another 487 words to Forevermore, and then looked at the total. Anya and Layla's story has 21,500 words in six chapters. With a whole lot more to tell, this might go over 100k words!

And, while writing this bit, I came up with an idea for a few chapters of a mini-journey of Layla's, set during the timeframe she and Anya were separated.
Yesterday, 20:50

No, darlings. It's not milk time every time I go into the kitchen.

Actually tempted to make this into a Closed Species. And would be totally possible, too, since I saved the uncolored version. :D
Yesterday, 00:08

Reminder to those doing the Hoopa Quest. I have this Site Map, which, I'm 98% certain has every single page on it. If there are any missing, just let me know, and I'll get it updated asap! ^.^
2 Days ago

Do you know what would be beneficial? At least, for me?

If, when Zubat chases me out of the Royal Tunnels, they had the decency to tell me the correct answer. At least then, I could attempt to put it to memory as I have done for a great deal of other EHP and Dex questions.
16 Days ago

I did it! Take a look at the cutiepie that I got from completing the seasonal journey.
20 Days ago 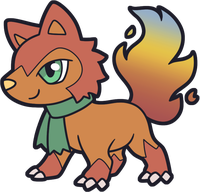