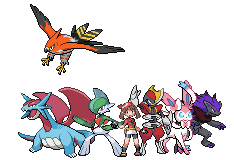 (Whole team sprite made by @Vio99)

PMD Castle in the Sky Sprites!

I have just recently noticed

After getting Among Us, I have joined a Voice chat of other people playing on Discord and wow, a LOT of chaos had happened- XD
3 Days ago

Okay who else thinks I should download Among Us on my phone-?
3 Days ago

How I’d voice acting in a movie:

Have you all ever wondered which hurts most: Saying something and wishing you had not, or saying nothing and wishing you had? I don't want to get too into detail, but I've been going through panic/anxiety for some time and I really don't even know what to do anymore. I've also had mixed feelings getting in my head, making me stress. I just don't know how I should be feeling...
8 Days ago

There was a lot of drama in Civics class again and (it was an accident) but someone put something that triggered me. I'm feeling pretty stressed out right now.

It helps, but if anyone who either is already doing a RP with me or wants to, please reply or send a PM
9 Days ago

There's something I REALLY hate. I don't understand why every time I have a Civics class, most of the other students start having meaningless arguments with each other that don't even relate to class. All of that drama makes me VERY stressed to the point I just leave the class without any words. I just hate how they cause drama in the class.
10 Days ago

I've been seeing that people are doing ships now. So...
Who do y'all ship me with-?
10 Days ago

Starting on the Fanfiction with an introduction. If you see it, PLEASE don't type anything on it. If you want to say something about the fanfiction, send me a PM
11 Days ago

hmm, do you all think I should make a Fanfiction here? It's just in my mind XD
11 Days ago

-when nobody's replying to rps-

This makes me so happy:

I checked Danganronpa stuff on the internet and saw there were apps for the first two games!
15 Days ago

Me: -crying over Danganronpa-

My dad: -texts me: WhY aRe YoU cRyInG sO lOuDlY?!-