If you're wondering why I added you to my Friends List, it's because I find you interesting. I generally don't follow people who post a lot of hashtags or WT reports.

However, I am not goth (at least I don't think I am) nor am I
made of butter. Nonetheless, I am still a Gothbutter.
I am a female, and 24.
My Birthday is April 15th, 1992.
Fav. Shows: Doctor Who, Game of Thrones, Steven Universe, House, Dexter, and plenty of animes.
Fav. Games: Poke'mon, Fantasy Life, Persona/SMT games, all Final Fantasys, Bravely Default/Second, Monster Hunter, Splatoon, and tons of others.

Show hidden content
Art below by Dcasom, Liffy, and me. (In that order.) 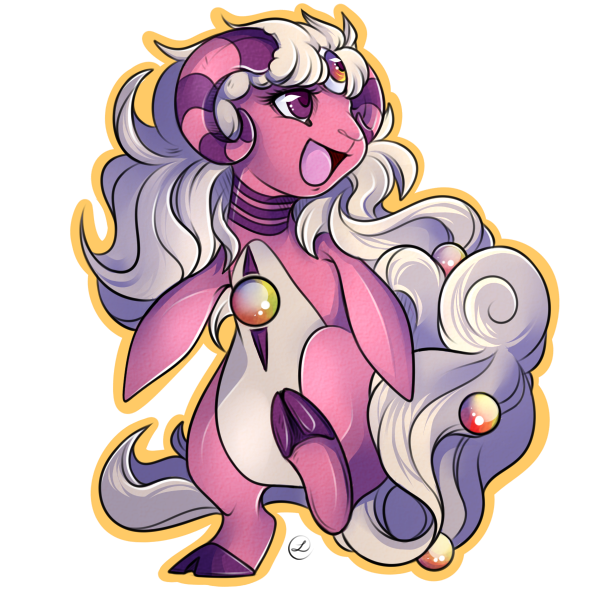 The time has come to go on a hiatus. My Premium has just about run out. And, to be quite honest I haven't felt too drawn to the site lately.
I will come back, though. I may even still come back daily, I dunno, but I will not be continuing my Mareep hunt until I have Premium again, should I decide to get it.
A big ✧･ﾟthank you・ﾟ✧ to all people who have helped me so far, as well as encouraged me. You guys are great. ♥
More details, stats, etc. in the comments. :'3
2 Years ago

#MyBestGiftEver
I will always be thankful for my family and boyfriend, of course.
I'll always remember all the Pokémon games dad bought me though... Especially Crystal. We went to the mall, and I didn't really know much about future pokemon games because I was tiny. And dad said not to peek in the bag he had as he went to get food. Of course, I peeked, and saw Pokémon Crystal as well as the strategy guide. Man... I was so hyped...
3 Years ago

For those of you worried about saving in a Pokémon Center in Sun and Moon, please read this. Your game is only in danger if you use Pkhex, a cheating software. Everyone else is fine.
3 Years ago

Ah, I somehow missed my 2 year anniversary of this shiny mega hunt. Heh... wow.
Here are some fun statistics. I have hatched 8,506 Mareeps. Of which 240 have been shiny, meaning about every 35.4 Mareeps hatched result in a shiny. I have hatched around 50 Mega-ables making approximately every 170th egg resulting in a mega-able.
[More in comments...]
3 Years ago

Congratulations! A shiny Mareep hatched out of one of your eggs (Chain #7000)!
Jeez. 7,000. That's a lot of Mareeps, aha. Welp. Another milestone I suppose. *throws confetti*
3 Years ago

I've been getting quite a few messages, especially lately, so I'll address this now.
I am not selling mega-able Mareeps until my hunt is over. I will make a feed about them once I'm ready to sell them.
Thank you for understanding. :3
3 Years ago

#MyWishForChristmas
Same as last year, to get my shiny mega Ampharos. ;u; I'd also really like to move soon. I'll have super fast internet once we move. That'll be so awesome. >: D

Also, a lovely new avatar by the amazing artist, *✧Liffy✧*.
4 Years ago

#WhatMakesMeHappy
I remember doing this last year. It hasn't changed much. .u.
Tetractys is pretty much completely inactive now, but luckily he's always here in real life. ♥
Food, video games, anime, and sleep are always great, too. :3
4 Years ago

YES! I'm absolutely sure I figured out the Secret Word now! ♥ That took, like, an hour, to figure out. .u.; *pats self proudly on the back*
I'm actually pretty impressed with other people who got it. I honestly don't see a lot of people getting it unless they just straight out share the word.
Good luck, guys. :3
4 Years ago

Oh, it looks like I've been hunting shiny mega Mareep for over a year now. :'D
How about some fun stats about my hunt? : D
I have hatched 4,158 Mareeps. Of which 105 so far have been shiny, making about every 39.6 Mareeps hatched resulting in a shiny. I have hatched 26 mega-ables making approximately every 160th egg resulting in a mega-able.
[More in the comments...]
4 Years ago

Congrats to LightningOddy on getting the first shiny mega Ampharos! :3
Okay, now that the first on site has hatched, mine can hatch now, right? *stares expectantly at eggs*
4 Years ago

Steven Universe is seriously one of my favorite shows. ;u;
If you haven't, please do yourself a favor and watch it. ♥
4 Years ago

Welp. I just hit 3,000 Mareep hatched.
Coincidentally, today is also the 9th month I've been at this, to the day.
I've hatched 80 shinies and 17 Mega-ables.
At the very least I have a very beautiful collection of sheep. You can just call me the ... 'Pink Shepard'. *wiggles eyebrows sporadically*
4 Years ago

It's my Birthday (according to Poke'Heroes, technically it's still about 5 hours from now) today!
To celebrate, I'm putting a shiny Mareep, Flaaffy, and Ampharos in the Wondertrade. So be sure to set up something~
I hope everyone has a delightful day today. *throws sparkles* ♥
4 Years ago

I hope there's a different way to get Mega Stones in the next Spring Update. I just... cannot do the Gem Cauldron. I don't even know if it was a glitch or not this time as it had no icon whatsoever and I just clicked the cauldron and it said "That was the wrong Gem." Ugggghhh... OTL
4 Years ago

The Cheat Panel just made me so happy I just...
*starts dancing*
4 Years ago

#UsernameOrigins
My group of friends in Jr. High all had nicknames for themselves, I forget what they were but most where relatively silly. I chose "Butter" for whatever reason.
Then, I joined my first online site called "Gaiaonline". Of course "Butter" was already taken so I stuck "Goth" at the front of it because I had believed that was the group I fell into at school. Wearing all black and whatnot.
I've been a Gothbutter ever since.
4 Years ago

"Congratulations!
1 of your artwork submission(s) won in our Spring Art Contest and are now part of our newest feature! You won 1 month(s) of premium membership for your fabulous artist skills!

"Congratulations!
You've been a members on PokéHeroes for more than 1 year now!"
Ahahaa. Awesome. ;u;
4 Years ago