So basically, I'm Error, it's potentially debatable whether I even exist or not and I'm not here to answer that debate in any way, though I can assure you, I have no soul, and I may or may not collect souls.
Also yes I do happen to hoard items exactly why and how I have as much PD as i do because I can't bring myself to spend them on anything, which sorta plays into the "Dragon" part of my username.
Feel free to contact me through palpad/pm for a conversation if.. for some reason you decide you want to talk to me?, I don't bite! much.
"Feel Free to Contact Me" does not mean try to advertise anything that you're selling or asking to buy anything because I can assure you: unless i have explicitly stated i'm looking for/to get rid of something, i'm really not interested, it's a waste of your time and mine.

So.. somehow this happened- pffff, honestly, i genuinely have no idea how to react, it's amazing alright.
"Best Written Character"
Calamity - Calamity in Reality

Congratulations! A shiny Rookidee hatched out of one of your eggs (Chain #85)! Your PokéRadar reset and needs new batteries.

Now just to get another 2 of these.
25 Days ago

By PokéRadar - 3 Minutes and 19 Seconds ago.
Congratulations! A shiny Litten hatched out of one of your eggs (Chain #183)! Your PokéRadar reset and needs new batteries.

Okay, uh, quick question: If i knocked someone out and gave them food while they're unconscious, do you think they'd be friends with me?

I think it'd work, but i want some second opinions before i try it out.
1 Month ago

Another fun useless fact:
I don't understand rabbit anatomy at all and struggle to draw rabbits.
I also can't draw birds because they're confusing, nor can i draw spiders which is sad cuz i'd love to draw some art of Squishy the Brazilian Black Tarantula that we owned who was honestly just a lad, great lad loved him. He lived a great life XD
Tbh i can't draw 98% of things that walk on two legs, being honest. Those 2% are humanoids but only my own humanoid characters because for some reason i can't draw other people's.
1 Month ago

Hey, fun fact: Sometimes i create arguments with myself simply because i have nobody else to talk to.
Yes i literally argue with myself.
I once had an argument with myself over whether Corruption or Chaos is technically scarier.

Yea.. this is how bored I get without anyone to talk to. And it gets even more boring when you can't think of something to argue about.
1 Month ago

Imagine having friends that actually give a damn about your existence, ha!

...Wait, some people actually have friends like that? More than 2-3? It's not just some strange myth I've heard?
Damn... must be some lucky people out there.
1 Month ago

So basically, random idea happened and I decided it'd be adorable to have an art piece of my character Error cuddled up to a Giant Fluffy Poodle Moth [like that there but.. bigger. Big enough for her to cuddle under one of it's wings, yea?]

Examples & Prices would be nice beforehand - even if it's just a minimum price, because I don't like having to offer without any sort of minimum to go off of. Feel free to contact me through comments, palpad, PM, whatever.
Since i like matching art styles to characters & art, for this piece i'm looking for a cuter, [more cartoony? more simplified? idk the word i'm looking for here] style, since i believe it'll work better for a giant floof moth and a cat-dragon-thing-child.
2 Months ago

By PokéRadar - 1 Hour and 18 Minutes ago.
Congratulations! A shiny Fletchling hatched out of one of your eggs (Chain #74)! Your PokéRadar reset and needs new batteries.

Pog. Now i can take a break from all these damn birbs and hunt a catto [1 Shiny Litten]
2 Months ago

I swear if this boredom continues imma straight up publicly defenestrate someone.
Why? Because i can, i'm bored, and i just wanted an excuse to say defenestration because it is 100% within my top 10 favorite words.
2 Months ago

By PokéRadar - 4 Seconds ago.
Congratulations! A shiny Fletchling hatched out of one of your eggs (Chain #308)! Your PokéRadar reset and needs new batteries.

Ah I see. Now to hunt just one more.
2 Months ago

...Yea... totally not a thing that just, happens to me sometimes.
It's even worse if those people are offline or something esp when nobody else talks to you 90% of the time so it's just like "Ah, i see. I must wait" but it's like "I wanna talk now tho, cuz excite"
RIP me lmfao
2 Months ago

Literally most people i know with ocs: *Has at least 1 sona, sometimes multiple*

Me: *Still to this day can't make a sona of any sort for some odd unknown reason*


Completely Unrelated: Y'know, one day i'm going to become god with the sole intention of just breaking at least 1 person's table randomly, out of the blue. Just because i said so.
Also Unrelated: When do i get my turn with the villain arc?
2 Months ago

If my responses to messages are slow/nonexistent for a while, assume i'm outside!
We're having a bbq because yes and mmmmm fire smell and sausage- but mostly fire.
3 Months ago

Congratulations! A shiny Maractus hatched out of one of your eggs (Chain #98)! Your PokéRadar reset and needs new batteries.

Pog. Could've waited two eggs but y'know, what're you gonna do about it?
3 Months ago

Welp MCC is over now! Was definitely a good watch, pretty fun n all that stuff. Was pog n whatever y'know all those good things.
No more public defenestration of people who dare disturb me.
3 Months ago

I'm gonna be watching MCC now.
Any attempts to bother me will be met with defenestration.
This is serious business, alright? I gotta see who wins

Man has like 6 diff viewpoints open rn lmfao, that's how seriously i take watching this competition.
3 Months ago

Guess who's feeling sick-
Today is just, not a good day. At all. Nope.
4 Months ago

Congratulations! A shiny Growlithe hatched out of one of your eggs (Chain #58)! Your PokéRadar reset and needs new batteries.

Pog. Now for another hunt.
4 Months ago

Congratulations! A shiny Shinx hatched out of one of your eggs (Chain #67)! Your PokéRadar reset and needs new batteries.

Gotta love when people message you but only allow messages from friends in their settings-
Here's a public reminder: If you want to message people and expect some kind of a response when they're not on your friendslist, maybe check your settings and make sure "only friends can palpad you" [or whatever the setting's called] is turned off, because otherwise surprise surprise they can't message you back!

Makes me wish there was a setting where if you had "only friends" turned on in your palpad settings, you couldn't message people not on your friendslist or it'd give you a reminder like "Hey, this person is unable to respond to your message due to your settings, so it wasn't sent!" Just something that'd stop people from getting messages they literally couldn't respond to.
4 Months ago 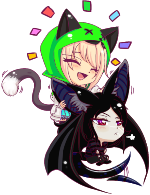 "Feel so lonely
The warmth from your glow
Am I a ghost?
Am I your anything?
Life begins to fade
Despair starts to take
With your faith on the line
I rise

Will you believe in me tonight?
Save me from the hollowness
Bring me back to life with love
Take me to the stars above"

Matching Panel With: ~Lucky~! | Art by Valcristsan
Song: "The Resurrectionist" by The Most Vivid Nightmares