Long story short, people call me Error. A game-glitching artist that debatably has an addiction to creating characters, even if I don't have much of a use for them.
Most of my free time is spent either drawing, making sprites, designing new ocs, or playing games! That does mean that I won't be able to respond immediately to any messages
Feel free to contact me through palpad/pm for a conversation, I don't bite! much.

100 Maps/Emeralds needed before I actually start the hunt, will probably try collecting more once the hunt has begun.

Have my most evil girl as a cat. Idk why, but why not. I love her. 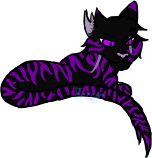 Corruption is best girl, all hail The Devil Herself, the embodiment of fear, the being made of pure evil itself!
Art by me- haha-

Okay, things i need to do:
-Sort out my damn computer folders
-Make a thread to allow people to suggest names for my ocs?? maybe??
-Maybe get some more writing done about some ocs of mine-

yes im posting this as a feed so i remember what im doing
Today, 12:52

Hm, i want a halloween themed avi, but actually based on one of my ocs...
...Honestly, it's a wish that'll probably never be filled. I doubt i'll have any ideas for one by the time october rolls around, or if i do have an idea i won't be able to draw it.

Either way, i might design a more halloween-ish themed character or two, anyway.
Yesterday, 20:19

Out of all of my ocs that are named, I have enough characters that i nearly have at least one character who's name starts with each letter of the alphabet!
The only two letters I'm missing are Q & Y
2 Days ago

I feel ill...
Guess i'm spending all day in bed watching Minecraft: Advent of Ascension
aka one of my favorite mods that doesn't have too much coverage in terms of youtube videos- you don't know how hard it is to find a decent damn series of that, seriously. But i finally have!
3 Days ago

It's like 7 am where i am now. Had an interesting dream that mildly involved the blood kelp from subnautica, some weird creature that looked like an overgrown ampeel and...
I'm still really tired XD
4 Days ago

It's 1 AM. I'm tired yet also wide awake.
I think i'll try to get some sleep. After all, I'm no Shadow, I can't stay awake for practically a week-
Gm & Gn peeps lmfao-
4 Days ago

Congratulations! A shiny Fletchling hatched out of one of your eggs (Chain #67)! Your PokéRadar reset and needs new batteries.

I guess back to designing tons of icons for my characters because I need all of my characters to have like, icons all in the same style-

Congratulations! A shiny Eevee hatched out of one of your eggs (Chain #142)! Your PokéRadar reset and needs new batteries.

Hm trying to decide what to draw...

I've had art block for the past few days and its really annoying me, i really want to draw but... i can't think of anything to actually draw... and each time i try to draw it looks horrible.
9 Days ago

Lots of avis be wearing these odd mask things but...

As a being that doesn't technically exist, this so-called "virus" can't affect me, and as i'm literally sealed away in a blank space with no human [or anything else, really] interaction...
My life's pretty sad, now that i think about it. At least i don't have to think about the problems of humanity while im stuck here.

-Calamity
no im not sorry, im bored as hell- XD
10 Days ago

Apparently my friend's younger brother:
1. Is a gulag
2. Is going to turn my friend into Vigil from Rainbow Six Siege

So uh, update.
School was only half a day today luckily

Imagine waking up at 4-5am, trying to get back to sleep and realising it's pointless and getting up at 6 am.

Can't possibly be me, no.

Either way, my time of freedom's up. School starts... today. And I really don't wanna be going.
15 Days ago

Okay I wanna design a ton of characters for myself based on a few of my own original species, so...

Pick a Number [1-5 - that'll be the species]
Pick a Rarity [Common, Uncommon, Rare, Epic]
Pick any of these, these or these palettes.

Up to 2 sets each [number & rarity & palette], you can pick the same number/rarity/pattern as another user - but you can't have all 3 of them the same as another user.
I'll post the results in my art dump when I'm done.
16 Days ago

So, as its my last free full week before school/college/sixth form, my mom took me shopping.
I saw an eevee plush that I've wanted for a long time, as well as a vaporeon plush [which had only been released in the past week or so] and there was an offer of "buy one get one £8"

..long story short, I got them both. Me and my mom split the cost half and half. The vaporeon i'll get at Christmas, but i have the eevee sitting right next to me. His name is Hero.
22 Days ago

7Hey, CalamityTheEnd! We recently found some eggs in our daycare. We're sure that those eggs belong to your Pokémon.
We really don't know how this happened...
However, try to take them as soon as possible, or I'll release them to the wild!

*looks at eggs in party* Well then.
23 Days ago

Okay so everyone, its my friend Luke's birthday.

He doesn't have a PH account, but I'll tell him everyone that says happy birthday-
I just wanna share a tiny bit of appreciation for him. He's a good guy.
24 Days ago

Until i can decide what goes here, have a mute thief child with a gun.
Also have an Error bean, because why not.
Art by me because yeet-