my humor is so dumb

decided to do this while I do a pokemon x randomizer nuzlocke which is painful
Yesterday, 14:54

I probably need to be more active here
Yesterday, 14:16

I had to move onto my laptop lmfao-
8 Days ago


Well uh its an xbox party-

4, doesn't bother me too much
8 Days ago

Yeah idk what to do rn, other than forcing my friend into a party with me on xbox lmao- just send random stuff
8 Days ago

Why am I having a craving for ice cream now-

Someone send help
10 Days ago

Congratulations!
You've been a member on PokéHeroes for more than 2 Years now!

Sass is giving away free plushies


I only need irl plushies
14 Days ago

Just turned off my visitor list because why not, now I wont know who says what XD
14 Days ago


my face was already ruined
14 Days ago

me: on a discord server with my friends

we decide to do a gay test on a bot there 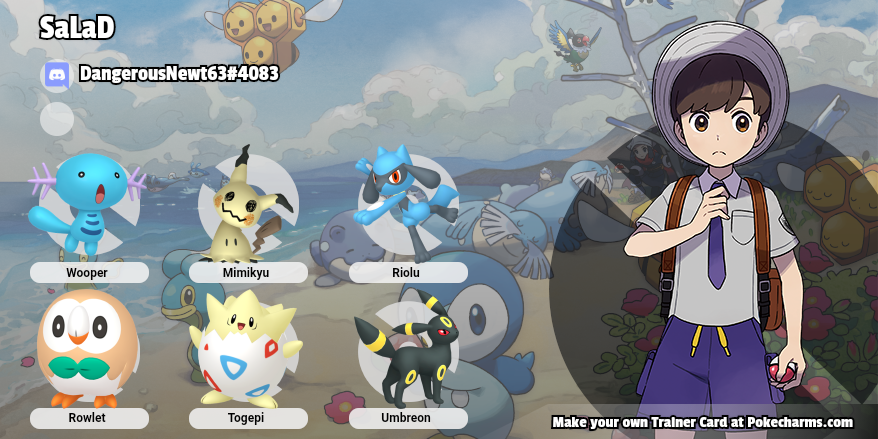 Sexuality: Heterosexual (still figuring it out)

In a relationship: ha no :'D

Favourite music: I'd have to say Fall Out Boy or This

Bad things about me:

I'm a very shy and awkward person, I like to make jokes even when they aren't necessary. I can be moody sometimes if you catch me at a wrong time

Some kinda good things about me:

I'm really easy to talk to when I know the person I'm speaking to, some of the jokes I make can be funny depending on your personality and I am never usually serious so I don't take offence to much


Just message me if you want to talk or be friends.