Fave Anime: MHA, Jojo, My Next Life As A Villainess, Nichijou,

I take Volcarona, Wailord, Grovyle, Dragonair and Ivysaur plushies. Basically plushies of my fave pokemon on the list!

Just a heads up: I mess up a lot of things when tired (including spelling and grammar. Even links and things I've copied too) so if you notice a change in the way I write, please tell me to go to sleep as I am probably tired.

Feel free to send a plushie! 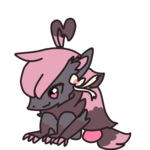 My boyfriend is Noki, he's adorable so send him lotsa furret plushies and hug him for me

Bruh here's a lil tip for artists: Make something YOU enjoy making, it doesnt matter if other people don't like it, you don't need to change your ways of doing things because other people may not like it as much as anything else u do, or whatever. If you are GENUINELY enjoying the process of making something and think its great, then imo its better than bending your art and everything to fit other people's likes, all while you aren't enjoying the process of making it
30 Days ago

If any of you who play roblox, and remember a game called "Project Pokemon" a new, similar game by the same devs released 2 days ago under the name "Doodle World" it has a similar playstyle and even reuses assets from the game (such as battle ui and sound effects).

Its pretty fun ngl! Project Pokemon was a big part of my childhood, and the fact its back in a way that doesnt break copyright and stuff is great. Just spreading the word for any other fellow past project pokemon players :3
1 Month ago

Instructions unclear Riako, instead of smelling i could HEAR the pokemon and colors hearing red say "Sus" is not want i wanted it ruined my day
1 Month ago

Zaminations is the best minecraft animation channel for children and no one can tell me otherwise.

The content is not only actually good for children, but also is the most memable thing ever lol. The series they did with squid game was just memed to death, and it has spread to all their other content like holy crap, zaminations is god tier
2 Months ago

Do u ever wanna draw something or do an art project or anything and then ur brain just goes, nope today ur gonna just not draw, and then u end up procrastinating the whole day
2 Months ago

Im back from a short break, not gonna be on that much or interacting with anyone much, but just going to be lurking and buying art.

I've calmed down a hella lot and have been doing an art project recently to better my art a lil. It's been good practise and been having a hella lot of fun ^^
2 Months ago

Honestly taking a break for now and go off ph entirely for a few days, idk how long but honestly with everything going on I cannot focus properly.

I had to cancel an important appointment because the stress was honestly way too much for me to handle and honestly the best way for me to stop stressing so much is to just take a break and breathe for a while, ive been full of general anger and sadness for the past few days cuz of personal things and this situation is just making my mind go full on numb.
2 Months ago

Can i say how much im so glad to have made so many good friends through this site who i consider my family, i swear ;w;
2 Months ago

Spoilers for pokemon day presentation in comments:
2 Months ago

AAAAA they're very cute~ too adorable to pass up the offer!
3 Months ago

I found this boy When wandering around in Legends Arceus! Named him Spice.

I think i may be opening up my art shop soon, after I make some more examples 👀👀👀
3 Months ago

Hehehe I've been playing vanilla pixelmon with friends and my bf

And I have found a shiny wishiwashi in it :3 i ended up catching it and naming it "w" bashed on the shiny on here :3
4 Months ago Cookie run fan, Genshin fan. I like other stuff as well, which u can find in the about me next to this panel. Pronouns don't bother me, call me by anything u initially think me as if u want.

I like Art, and love drawing and designing new characters. I do art Comissions, but they're closed atm.

I'm not as active as much as I'm used to, but I will continue to log on each day for a few hours and continue to buy amazing art from people :3

I play fnf and I'm good I guess, My boyfriend Kapi is better than me at fnf.

I RP and write stuff but I'm not that good compared to others.

Avatar made by me

Art of Aera and Noki by Valcristsan

Peeps you should definitely hug:

TylerLee05: Creator of an RP that seriously changed my life! Without Crossover heroes 2 + 3 idk where I would've been!

YungRover: Friend I met in Crossover Heroes. Has been there for me when things were tough and is an amazing person!

Corviknight: Another friend I met in Crossover Heroes. Really talented artist who's void creatures are insanely cool and should definitely go check them out!

Noki: Cool furry bean who deserves hugs. Very cool person and is very kind and caring than he initially looks. He is a sweetheart and deserves a lot of furret plushies.

~Tox~: Cool artist frien who I don't deserve. They're amazing and should check out their art and stuff

jack_akira: Awesom friend from school who's pretty cool. They're practicing art atm and they awesom