Please take in mind that I am a minor before sending me a message. I am in the age group 10-15

Hello! I am MsLovelyLesbian, my old username was MsLovelyRainbow. You can call me MsLovely or Rainbow for short! My preferred pronouns are She/Her but I do not mind They/Them. I am a Libra and my timezone is EST (I live in Michigan in the USA). My birthday is October 22nd. Here are some of the things I like:


-Pokemon (I first got into Pokemon with Pokemon Ultra Sun, my favorite game is Pokemon Shield!

<- is my favorite pokemon!)
-Video Games (I mainly play Pokemon, Minecraft, Rec Room, Legend of Zelda: Breath of the Wild, Boyfriend Dungeon, Genshin Impact, and Five Nights at Freddy's. Did you know I have a shelf full of fnaf books and figures?)
-Music (I don't have a favorite genre, I listen to all of them! My favorite bands are Imagine Dragons and Green Day)
-Art (I really suck at making art but its fun!)
-Roleplaying (My favorite roleplays have gotta be two clans clashing together, preferably Kingdom vs. Resistance. I love to roleplay and will sign up for any that seem interesting.)
-Anime (I am getting into such animes like Little Witch Academia. Please do not spoil any anime plot twists for me but suggestions to watch would be amazing! Madoka Magica is a really good anime!)
-Cartoons (I love Gravity Falls and I'm getting into The Owl House!)
-Horror Movies (feel free too suggest a good horror movie, it's my favority genre!) 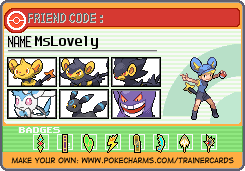 Please read this before sending me a message!

If I offend you, please tell me. I do not mean it and I will make sure not to say/do whatever offended you.

Starter Collection
(47/72)
Please look in my starter box for any I am missing! I also take retro starters as well.

1 Month Premium: I currently have 62 out of 800 Nuggets for Premium

My school has a sign near the pool saying "Aquatic Center"
FOUR LETTER WORLD
STARTS WITH P, ENDS WITH OOL
POOL DAGNABBIT
Yesterday, 14:49

OH COME ON- when i was doing a PRIVATE HUNT, IT BLESSED ME WITH A CHAIN 75 SHINY
NOW IM ON A HUNT FOR MY OWN LITTLE DAPPER BIRB AND IM ALREADY ON CHAIN 90
WHY
complaining has apparently helped other people so
Yesterday, 01:22

Finished book!! :D Here's my rating:
Aru Shah and the End of Time
10/10 ITS AMAZING!! its alot like percy jackson in the sense they're descendants of gods, BUT THE MAIN CHARACTERS ARE GIRLS :O and it was just an amazing book to get into.
Now time to get into WoF! >:D
Yesterday, 01:05

send me something im bored
ill put all of the messages in the comments of this feed btw
Yesterday, 00:13

my friend was taking a picture off my other friend at lunch. the friend that was getting their picture taken was holding a plushie and sniffing it, i looked at him questioningly like "tf are you doing bro"
. . .
now I've been turned into a meme by that same friend. Betrayal.
1 Day ago

OH MY LORD- i am so relieved. So earlier- long story short- my sister fell on her foot the wrong way. Mom took her into the doctors. Three-ish four hours later, they returned. She only has a sprained ankle and nothing broke. Even though she's in pain, it could've gotten worse.
I'm sorry for a little rant but i had to get this out of my system.
2 Days ago

now if my sisters ever take one of my things and leave it in their room, ill be able to tell who did it >:D CSI class is fun
2 Days ago

My two year old sister does this fun thing with pool noodles, she takes one end and tries to give me the other end and wants me to speak into it.
I sang video game music. Which included Mario, undertale, and the battle win music for final fantasy.
:DDDDDD
3 Days ago

Quote from my new library book:
"Hotness doesn't belong to any one gender."
AHHH I LOVE THIS BOOK SO MUCH ITS AMAZING
3 Days ago

My friend sent me an email that says 'My braincells at 3am'
I responded with:
'our braincells'
no literally our group only shares at most 3 braincells
4 Days ago

[pokemon cards]
AH IM SORRY FOR CLOSE-ISH FEEDS
BUT I NEVER NOTICED THAT MY XERNEAS EX POKEMON CARD
WAS A SHINY CARD!! AHHHHHHHH
4 Days ago

i figured out i can lock my Chromebook and have youtube still on
>:D i can finally listen to music while sleeping
4 Days ago

it wasn't until a few weeks ago in science that i realized hetero means different/opposite and homo means same.
we we're talking about genes, like heterozygous genes and homozygous genes
7 Days ago

the daily dad joke told in the lunch room. .
"there is only a thin line between being a numerator and denominator . . only a fraction of you will understand that"
our principal tells a dad joke a day in the lunch room
7 Days ago

AH
ONE OF MY FAVORITE DAYS IS THIS FRIDAY :OO
7 Days ago

Hello! I'm Shock! I'm the owner of this little corner of the profile. Don't tell the other shinxes, but I'm MsLovely's favorite, heehee!

This place is where I hoard gems, items, and pokemon! MsLovely has entitled me as the shopkeeper.