Hey. I'm Phantom, your friendly neighborhood weeb in need of a coffee. I enjoy anime and video games, with JRPGs being my favorite genre of video games. Some of my favorote video games include Pokémon, Final Fantasy, and Minecraft, and some of my favorite TV shows include JoJo's Bizarre Adventure, My Hero Academia, and Steven Universe. I don't really have a favorite music genre, but I like listening to soundtracks, electronic music, lofi, and classic rock. Also, yes, I'm a girl irl.

The spider who sits in her web eating takis, sushi, drinking Coke, and constantly plays Kirby on her switch - Hollow-Masks
Brother - LoneWolf8600
Demon Snom - The_Radio_Demon
Sister - TheBlackAlpha
The middle child who is a closeted furry, and you only just found the fursuit in her wardrobe - CherryDonut
Pet demon - BlackReshiram
The cousin you've seen around before but never realized you were related to until you spotted her at a family event - ZeeTheBee 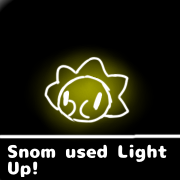 Reshiram ploosh when, I don't want these shinies
Today, 00:10

The Gacha games made by Lunime are not true gacha games because obtaining randomly-selected in-game items via a gacha system is not a cental aspect of the gameplay.

Should I change my avi back to Wholesome Bruno, I've had this Xayah avi for a while now
Yesterday, 12:27

The Mega Banette on the front page earlier was nicknamed Zipperman.......

No thoughts, head empty
1 Day ago

Made a new SU OC named Redstone (YES, her gem is Minecraft Redstone, and... idk whether or not redstone is considered a gem, but Bismuth (whose gem is actually a metal, not a gem) exists, so...)

Got my first Covid vaccine today, gonna get my second one in like a few weeks (Deleted last feed bc wasn't specific enough)
1 Day ago

The real reason why vampires sparkle:

Vampires normally turn into dust whenever sunlight touches them. To prevent that from happening, some vampires put on a ton of sunscreen, which keeps them from turning into dust. It also makes them sparkle.
2 Days ago

If you make a Steven Universe gem OC whose gem is some kind of fictional mineral found in some other media, then I guess it would technically be a crossover/multifandom OC
2 Days ago

Pippa Peg: The show where literally everyone looks like a preschooler's drawings and everyone's eyes turn into sprinklers whenever they're crying
2 Days ago

If I do create that demon OC who's in the mortal realm in the form of a hooman child... Yeah, either they've been kicked out of the underworld/devildom/the bad place/whatever they call it in that universe for some unknown reason, or they just want to find out what humans are like from the perspective of a young human
2 Days ago

OC idea I came up with:

A demon who's at least 3000 years old, who has gone to the mortal realm in the form of a human child in order to try and understand what humans are like
2 Days ago

I hope this site doesn't shut down
2 Days ago