Show hidden content
Lysander succeeded in activating The Ultimate Weapon, only Arceus know how much time is left until every living thing is wiped off the face of the Earth, A young boy named Jesus has a father who is in the works of a bunker to protect anything they can in the region of Amoria, Team Flare has made its move against the other regions, including Amoria. It has gotten to the point where previously disbanded teams have returned to fight back. Team Rocket, Aqua, Magma, and a new team, Team Omni have sent out forces to protect certain parts of the world for their own benefit. In the words of Giovanni’s announcement when he returned “There is no point in hiding, there is no point in attempting world domination, there is no point in anything unless we protect what little we have. I call out to other Teams in the world, let us band together and protect this world and do our best to fight while bunkers are made.” The world is calling out for hope, will you be there to fight for it?

Show hidden content
Wild Encounters are decided by RP Admins
No Powerplay
Only 4 Moves per Pokemon
RP Admins decide if you catch Pokemon or not
If you want to catch a RPer (The Pokemon Rper not the Humans) You must talk to both ShadeKinoSoul and the RPer you want to capture
No Roleplaying characters that aren’t yours
Items are kept track by RP Admins, don’t try to get your way by infinite Pokeballs
Have Fun
Your character can die, whether Human or Pokemon, once you die, you’re kicked from the RP
1 Character per user (With exception of Chara’s family)
1 Pokemon Character per user (With exception of Chara’s family)
Fusions are allowed, but Mythical/Legendary/Fossil Pokemon are not able to be RPed
Starters: Chikorita, Cyndaquil, Totodile
Password is Amoria

Show hidden content
Amoria is a small mini region located off the coast of Jhoto, It is mainly grasslands and mountains. There are 4 sections of Amoria, Grassland, Mountain, Tundra, and Forest.

Mountains
Some say that when the world is coming to an end, the 3 birds of apocalypse will fly over the mountain, circling it. Home to mines, a few small towns, and most of Amoria’s culture. The mountains are the backbone of the region, full of legends, secrets, and more! Country Music and myths of Pokemyths such as Centorius, the half man, half Amorian Gogoat.

Tundra
Home to Amoria’s best cooking, the Tundra is full of Villages that are home to the best cooks in the region. Most of the region’s food based specialties are found within the Tundra, such as Maliano, a bun that is similar to Sponge Cakes, along with their own unique and exquisite taste and looks.

Forest
The most mysterious part of Amoria, the Forest, is considered the most dangerous and isolated part of the entire region. No more than one village is known to exist within this dense forest. It is said that Zarude lives within the Forest and attacks whoever is considered a threat.

Human characters will all start in Sapphu Village, there Jesus and his father will be looking for people to join their bunker project. Accepted both of you, please remove the password
My Discord!
Aname

Human Entry-
Name: Aname
Personality: Lax
Age: 15
Appearance: Long brown hair, often wearing a gray or yellow jacket over a t-shirt with jeans, wears glasses, has a watch and two bracelets on his right hand.
Gender: Male
Starter: Totodile
Food Preferences: Seafood, curry, Cajun, or Jamaican
Best Skills: Fishing, Cooking
Worst Skills: Cutting Wood
Password: Yes
BACKSTORY: Two years ago, Aname set out on his Pokémon adventure in the Fria-Fria region. On his very first route before he even beat the first gym, he encountered Team Haze with his fellow trainers and began his quest to save the region- and the world- from what Hazon's (their leader's) plot for takeover. He joined Team Azu (a team founded to counter Team Haze and protect everyone, based in Azu City of the Fria-Fria region) along his adventure and stopped Team Haze while rising through the ranks of Team Azu. After Hazon was arrested and most of his grunts were freed from their hypnosis, Aname and the rest of Team Azu thought it was over. They were very wrong, and about 3 months later the team began to regroup as the Team Haze Remnants. 6 months ago Hazon escaped from prison and began conquering the region once more. Upon Lysander's activation of the ultimate weapon and Giovanni's calls for teams to unite, Team Azu and Team Haze came to a fragile truce, and Aname (now one of the Elite Commanders of Team Azu) was sent to Amoria (without his Pokémon) to represent both teams...
Pokémon Entry-
Name: Pipsqueak
Species:

Shiny: No
Age: 3 years
Held Item: Amulet Coin
Nature: Mild
Ability: Defiant
Move-Set: Brine, Drill peck, Metal claw, Hydro pump
Gender: Male
Password: Yes
BACKSTORY: Aname's first Pokémon, Pipsqueak has seen his entire adventure, but had to be left behind with the rest of his Pokémon to protect the Fria-Fria region. He is helping build a bunker now, but he and Leavanny are trying to make it to Amoria to meet up with Aname.

Will definitely join this soon, either gonna have a Roserade or a Hawlucha (since I don't think I've made any Roserade or Hawlucha OCs before, and both of them are cool)

Edit: I'm guessing "With exception of Chara’s family" means we can play our character's siblings, parents, etc. as well (based of my new vulpix I caught yesterday)
forever eating spaghetti 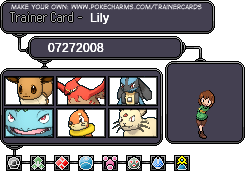 Name: Kendo "Admin" Sakura
Personality: he seems tired and slightly weary most of the time and can be distant and cold to people he does not know very well. However with people he trusts, he can be pretty chill, though he’s quite sarcastic. he
Age: 24
Appearance:

Gender: Male
Starter: Cyndaquil
Food Preferences: Any fruit or meat.
Best Skills: Cutting wood, cooking. (Also a talented marksman)
Worst Skills: Mining
Password: Blep :P
(EDIT: Aight so imma write a backstory real quick mkay.
He originated from Kanto, but traveled the world in his teen years. He settled in Kalos, and tried to start a new, peaceful life. then the Team Flare incident happened. He fought against Lysandre but lost, losing his team in the process. Now he just wants to survive.)
IIIIIIIIIII~

(No, all trainers will start with only the starter given)